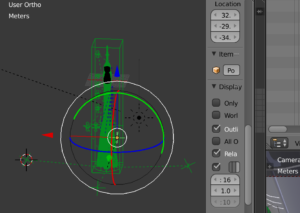 Found the Train Pullaway shot and started reassembling it.

Worked on modeling, rigging, and animating the Soyuz rocket plume effects animation. I’ve completed the core + pod stage effect and at least a first draft of the upperstage effect (less happy with that one, because it doesn’t hold up as well from the low angle I want to use in the shot — but I might be able to get it to work well enough). I have not added an “envelope” effect to either of these, but I’ve reached the point where I want to try it out before tweaking it more.

Started working on re-rigging the launch vehicle staging system. It’s fairly complicated “constraints rigging”, so there’s a lot to do. I was still working on this at the end of January.

I finished a brief informative presentation video on the “Creator Endorsed” concept and trademark. I’ve been planning to incorporate this as an extra video on the video download page for “Lunatics!”, but had a
hard time coming up with how to present it.

What I’ve got is pretty effective, but a little plain, and maybe it sounds a little too confrontational. I didn’t want to take too antagonistic an attitude towards the traditional copyright system, but I also need to differentiate us from it. So it’s a delicate balance to get right. I also wish it had music or something and maybe I could add fancier animation, but I don’t have a concept for that. So it’s just straight voice-over with slides at this point.

Still, this is the sort of thing I can update. I mainly just need to have something there to fill the need.

Fixed the purple/pink color issue with the fonts, by live-patching the active site. I still haven’t got LunaGen set up to where I can easily regenerate from sources. That’s because I never got around to packaging it for command-line use, and I haven’t reinstalled Eclipse yet.

The 18.04 to 20.04 Ubuntu Studio upgrade was really rough. I have a standard installation of Aegisub now, which is cool. But VLC is a mess — the native version is buggy and crashes, especially with the
two-monitor setup, and the Snap version can’t see most of my production directories, so it’s a pain to use. There’s no native Eclipse, and I have not yet tried to set up the Snap package for it. I lost other things, too — I just discovered that LibreOffice Writer wasn’t installed.

So this is still causing me headaches.

There’s still a few unresolved issues from the hard drive recovery and data migration process. Still don’t know where everything should go.

I collected all of the production work from 2020, including the Lunatics, SWRT, and Film Freedom production projects, into “Topical Summaries”. These are pretty cool, and will be the basis of my annual activity report.

I also spent a lot of time on infrastructure, maintenance, construction, and development work in 2020. But I have not collected any of that into summaries. I’m thinking I probably will do so for the development and IT work on KitCAT, TACTIC, and LibRay.

With the production topical summaries, and the monthly worklog summaries for 2020 done, I have what I need for an activity report. I’ve also started downloading purchasing records. I’ll need to collect more
information and also download tax forms in order to finish our Profit & Loss Statement for 2020, and I need that to start on the business taxes,which I in turn need to start our personal income taxes. Although it’s a safe bet we didn’t make any profit in 2020 — we didn’t sell anything, so it was clearly a loss.

While I was in there to work on the correct placement for the rocket plumes, I also took a look at the current “constraints based” rigging system that Chris Kuhn created for this model.

I’ll be using the same basic conversion strategy on this model as I did with his other mech models — essentially I’ll use an armature to rig his controls. This is useful, because it means there’s just one armature object to proxy into the animation file, instead of having to use separate proxies for each control object.

At the same time, I’m looking into a means to make the pods detach from the rigging system, so I can use rigid body simulation on them, once they are separated.

As a first step, I’ve created empties here to mark the locations where the pods will be transferring from the rigged “breakaway” sequence into the simulated “free” sequence.

I might try this for all the stages. But I’ll definitely need it to get a realistic animation of the pods tumbling and falling away.

My Work is Cut Out for Me… 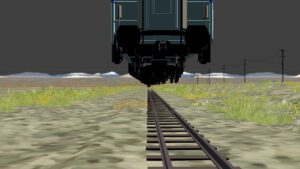 This is the state of shot “S1E01-TR-4-1-TrainPullaway” on January 2, 2021. Which shows some of the problems that can accumulate from neglect when there’s been a long time between first creating a shot and finishing it. Often, I have to make a lot of corrections. Despite looking pretty silly, this one is a relatively mild example.

For comparison, here’s a still from the 2018 animatic, of how this is supposed to be arranged: 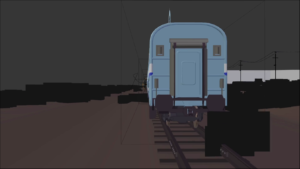 I made several changes to the “PK_Passenger_Car” model (“PK” stands for “Platz-Kartny”, a particular style of train car, that has been used on the railway through Kazakhstan that goes through the town of Baikonur), where our story starts.

Files get out of date, and in the beginning, we had a lot of problems with mismatched scale, even though we started with the goal of setting everything to “Meter” scale in Blender. I may also have changed the origin point for the train groups or for the set.

The gravel bed for the rails is missing, and it looks like the particle grass/weeds may be underpopulated.

On the plus side, I have apparently not broken the link to the file that defines the train cars!

Also, you might notice that I’ve extended the backdrop and background set (this may be one reason for the grass system being underpopulated — it may have a larger area now).

This is a two-minute presentation of how the “Creator Endorsed” business model works, contrasting it with the way that “Copyright Monopoly” models work, and hopefully making it clear why CE is preferable.

I really struggled over this one: trying to figure out what had to be included and what is probably irrelevant. I wanted to keep it short and simple, but I also had to fill in the necessary context to make the idea make sense. I also wanted to avoid coming across as too angry or confrontational, but still make the case for why CE is socially preferable. I felt that was a particularly tricky balance to strike.

This is probably only a first draft. I can likely improve both the voice-over work and the animation. But I figured it’s best to have a simple version now and I can improve on it later.

All the art in this video is Public Domain / CC-0 and I release the whole thing CC-0 as it is.

Having this informational presentation has been part of my concept for the episode release web page, since the beginning, but it took me this long to get a handle on how I wanted to do it.

Since so many of these concepts have a nice, circular emblem to represent them, I decided to design the animation around that. Also has a bit of the style from Lawrence Lessig’s “Free Culture” videos, with the keywords on-screen.

I wish I could think of a way to make this more catchy or humorous.  Perhaps I will, eventually. For now, it’s just straight.

Another thing I wondered about on this one is whether to include the history of the Creator Endorsed mark. The concept was originally due to Karl Fogel of QuestionCopyright.org; the artwork for the trademark provided by Nina Paley; and demonstrated in practice by her release of “Sita Sings the Blues“, using a CE-based business model. Her success with that was one of the inspirations for creating the “Lunatics!” Project.

In the end, I decided that was too much to cover and not really important to the functional nature of this project.

I’m looking into adding some music to my voice over on this, but since I want to keep the result under the CC-0 / Public Domain dedication, I’m limited to using PD/CC-0 music, which is a little harder than the CC By-SA standard I use for other work. I’ve got some promising tracks from FreeSound.org and MusOpen. The main issue is making them compliment the voice-over well, rather than competing with it.

Would love to come up with something catchier along the lines of the “Minute Memes” that Paley produced for Question Copyright, but I don’t have much inspiration for that.