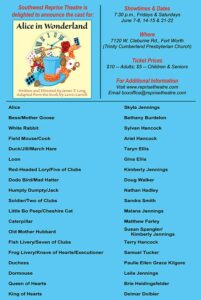 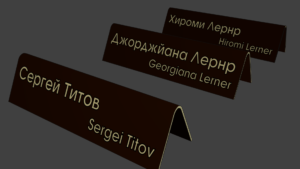 This is one of those simple finishing touches I just never got around to doing: name plates for the press conference, but I’m trying to get this sequence “render ready”, as I want to render some of it for another (different!) preview clip.

The text is just a texture — I think it looks better and it’s certainly faster. 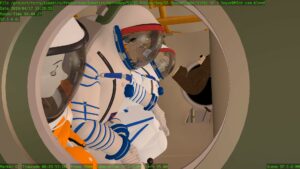 After several retakes, I think I’ve finally recorded a decent screencast of the assembly process for the character animation file for the last major sequence in episode 1. The above is a test image I took after blocking in the characters, props, and set.

I’m not sure why I never composed a shot through the porthole for this sequence, but it looks kind of cool. I may have to see if I can work it into the sequence (which does need some revisions). 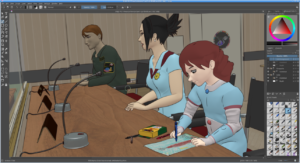 Over the weekend, I decided to try rendering to Multilayer EXR, rather than PNG. I just rendered a couple of frames, but I wanted to get an idea of what it would be like. I found I was able to open the resulting image in Krita, as you can see here (note the layers menu on the right side). The most obvious thing was that I could turn the ink lines on and off by just changing the layer visibility.

The appeal is that, with EXR footage, it would be possible to go back and recomposite the output from Blender. I can think of several use-cases. For example, it might be possible to re-render only the color layer of a shot or adjust the color, overlaying the Freestyle lines from the already-rendered EXR.

Or, conversely, it could be used to clean up stray ink lines that sometimes appear in animated Freestyle lines (occasionally an edge will render intermittently, creating a flickering line in the output).

With simple PNG bitmaps, rendered after compositing, these things would be very hard to correct, but the Multilayer EXR format allows me to preserve the render passes separately.

The downside is that the resulting image file is much larger than the PNG file frame. I’d be going from about 1.4 MB/frame to about 35 MB/frame, based on this test (might be larger if I included more render passes). At that rate, the whole 16 minute episode one would weigh in at just under 1 TB in total. That’s a lot of disk space!

On the other hand, I did a little browsing online and found two 1 TB USB sticks being sold that were under $25. It would not be impractical to render the whole episode, write the EXR out to such a device and just store it offline in a box in case it is needed.

Compared with the cost of re-rendering the shots if anything is changed, it might well be worth it, though. Mainly I’d need to have a better idea of what I might be able to do with the EXR files, and also how best to produce a useful one (meaning which layers do I want?).

I  am starting a “making of” series of screencast videos and eventually a “course” about our production design on “Lunatics!” open movie — which I’ve decided to call “Filmmaking for Lunatics!”. This series will illustrate our process by working through the assembly of the “SF-SoyuzFlight” sequence that ends episode one.

I’m giving our $12+ patrons a sneak peak at this series by posting the videos here as I finish them.

Mind you, these are supposed to work together and there will be some text content (e-book or HTML) to go along with them.

This first one is an overview of the plan for putting together the whole sequence — laying out our production design conceptually before diving into actually creating the production files.

I should be posting about one or two of these videos a week until I finish the sequence. I’ve already recorded several and am now working on editing them.

The videos are meant to be no more than about 15 minutes in length, each, usually requiring extensive editing and speed-ups of slow processes (watching the whole process in realtime would take days and be very tedious to watch, so I’m trying to just give you the “good parts” version, with the rest sped up).

These are not exactly ‘tutorials” in that I’m not explicitly teaching, but rather documenting the process we are using on real production files. My hope is that this will give you a more realistic idea of the process required for a real production. I’ll cut off a few dead ends and repetition, but will try to follow approximately the real process used in creating the sequence, so it’s a more honest picture of the process than a typical tutorial.

I’m hoping this will be useful, but it is still kind of experimental.

This next 2-minute “Filmmaking for Lunatics!” segment is the introduction to the assembly of the first subsequence, which collects the action from inside the Soyuz spacecraft during the flight.

I know this is a lot of intro material, but it will hopefully make the blender screencasts make more sense. The next video is an explanation of the first library prop used in the sequence — the Teddy Bear String Rig.

Before putting the sequence animation file together, I had to check that the components are all up to date. In this 10-minute video, I explain how the “TeddyBear_StringRig” prop is supposed to work. The next video will screencast me actually fixing it (accelerated).

In this next Blender screencast video, I show the process I went through to rescale and fix the TeddyBear_StringRig prop. Part of the “Filmmaking for Lunatics!” series.