Work on the “Down the Rabbit Hole” Open Movie project: 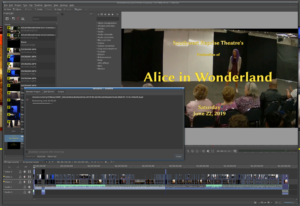 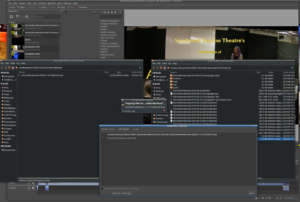 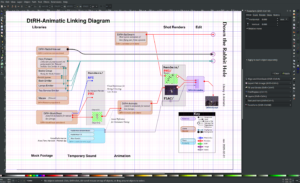 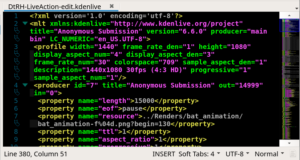 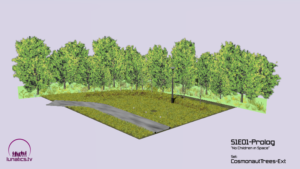 Last set completed for the “Touring Baikonur” sequence. We had to finish seven sets in total for this sequence. This one of a (fictionalized) section of the park with the “Cosmonaut Trees” (there really is such a park, adjacent to the “Cosmonaut Hotel”, but it’s not entirely clear which part of it this is).

There’s a lot of “greens” work in this set: particle system grass, small 3D trees generated with the “Sapling” extension, and a backdrop composed of rendered trees and grass painted in MyPaint (the same paintings used for the particle systems).

Having made this view just for this blog post, I’m thinking it might be cool to show all the sets this way. Perhaps I will do that.

“Dude… the grass is moving!”

It’s kind of infuriating when an error doesn’t show up until a final render has been done, but this shows how that can happen. I made several still-frame check renders prior to sending this to the render server, but the fact that the grass was moving was not obvious from the still frames, even ones during the time it’s moving.

Nor does the problem show up in the GL pre-viz render. Particle systems are one of the things that gets omitted to make the pre-viz rendering fast.

And it took some time to work out by process of elimination what was wrong — my first thought was that I had accidentally created key frames while moving the set mesh into place. But there were no key frames at all defined in the background set (of which the grass is a part).

That’s because, technically, the grass is not being moved by “animation” (key frames), but by “simulation” — it’s “falling” under simulated gravity. That’s because this grass is a billboard particle system, and I had accidentally set the “Physics” panel to “Newtonian” instead of “No”. Particle systems are used for lots of tricks in 3D animation, and many of them are supposed to move.