Continued work on “Ten Years of Film Making for Lunatics”.

Got some free books, including ones on Maya and 3DS from the Hill College library. I thought this might help to make comparisons to Blender.

Made some interesting open source software discoveries, including “Kaitai” which is a system of libraries for parsing binary data files, which includes a description for Blender files. This might provide a way to create that Blender Diff utility I’ve wanted, with less development effort.

Looked at a number of Fediverse software platforms and hosting services we might consider using. I’m strongly considering some kind of hosted solution for creating a Film Freedom Peer Tube instance — might be the best way to publish content, especially tutorials.

Gumroad has automatically switched me to a no-monthly-fee service. I think they got rid of the paid service altogether. I was considering switching back already, so that’s probably fine.

Monolith has failed. As of the end of the month, I haven’t taken the time to troubleshoot it yet, or train Nicholas to, which is what I probably should do.

Installed wheels on the Printer/Network rack. Makes it a LOT easier to pull out to work on!

Finally created a Mastodon account, so I’m on the Fediverse. I joined mastodon.art, rather than running my own instance.

Also re-awakened my LunaticsTV Tumblr account. Loaded links to Production Log monthly summaries to the queue, padded out with reshares.

Produced a lot of still images and converted presentation slides to use in social media PR posts, mostly just adding the “lunatics.tv” watermark to them. Many of my Mastodon posts are from these.

Worked on a revision of the Studio Pipeline diagram, but it still needs a lot of work.

Created consistent monthly topical summaries for 2021 to date. I’m now just using the topical versions for monthlies and dropping the chronological versions. I also added slideshows for “real world” tasks and events. For monthlies, though, I’m selecting slides individually, rather than just using the image sequence feature in Kdenlive.

Started work on a 2020 slideshow to accompany the annual topical reports (I don’t want to try to make monthly topicals for 2020, since it’s already done for the annual report).

Started work on a circuit trace/diagram for the Library. Still need to do a lot more work on it.

My monthly summary posts incorporate the Patreon posts from “Lunatics!” and “Film Freedom” projects, as well as highlights from my work log, photos from physical work around the studio, and extra stills, slides, photos, and notes that never made it into posts here on Patreon.

My monthly summary posts incorporate the Patreon posts from “Lunatics!” and “Film Freedom” projects, as well as highlights from my work log, photos from physical work around the studio, and extra stills, slides, photos, and notes that never made it into posts here on Patreon. 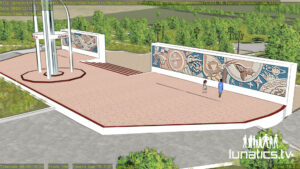 I planned to work on software this month, and I have been working extensively on packaging “LunaGen”, my home-spun static website generator. I’ve managed to refactor it into a proper command line tool, written functional tests, and converted elements of my design into modular “add-ons” to make the program more general purpose and more extensible.

When I first wrote it, I just cobbled together some python with YAML and Jinja2 to produce the site I have up now at http://lunatics.tv. But then I haven’t updated it, because my script would only run in-place in Eclipse. Too many hard-coded elements and no clear separation between content, theme, data, or code.

It’s always going to be pretty spare and fairly targeted at basic media lists, but now it runs from the command line. I’m running functional tests on it with PyUnit, running the command in a subprocess. And the site design has been factored into distinct data, site-design, theme, and code elements that can be switched out.

I even designed a logo for it (mainly so I can use it on my studio workflow diagram):

This is also the time of year when the first chill of winter is felt here, and this has been a month of home and studio repair and construction work. I’ve added trim to seal the door to the studio better and started repair work on my home’s roof. So that has cut into production time.

This is only tangentially related to Lunatics, of course. But it means I’ll have a nicer place to work, especially as it gets cooler.

Mastodon, Fediverse, and Other Social Media

I have not even half the followers on Mastodon that I do on the LunaticsTV Twitter, but I have easily two or three times the engagement — it’s a much friendlier room.

I’m researching options for embracing more of a presence on “free” and “federated” open-source networks, which would of course be more consistent with my mission on Lunatics. I had been holding out to install a lot of software on my own virtual server, but I’m now considering the possibility of using managed hosting or some related option to avoid the IT overhead of managing it all myself. I’ve been frankly overwhelmed by that.

It’s a bit of a dilemma as the big proprietary sites (Twitter, Facebook, YouTube) have MUCH more theoretical reach, but as I’ve observed on Mastodon, there may be a much higher quality audience on open source networks.

I’ve also been gathering, annotating, and watermarking stills (like the lead picture on this article) and slides for project promotion and also to have as extras on data DVD releases and so on.

Updated slide with watermark about the development of Georgiana, which will lead people back to the project if the image is reshared on social media and attribution gets lost.

Similar slide for Hiromi, not using the standard branding watermark, but I got the correct attributions updated, and the URL is on there.

I’m currently updating the production pipeline drawing I originally created in 2015 to represent my current workflow, the historical workflows that led to it, and perhaps the proposed workflow for 2022.

I’ve done some more software research this month. Open source software keeps getting developed, of course, so I need to review and catch up. Also, I keep discovering new things — even things that have been around for awhile.

A recent discovery that I’m kind of excited about is Kaitai — a flexible tool for describing and parsing a wide range of binary file types, which among other things, includes a description for Blender that would possibly allow me to pull a Blender file apart into a graph of data objects and then reassemble them again. Combined with a scriptable VCS tool like Bazaar/Breezy which could then treat the file as a directory rather than a single file, it might be possible to create an effective tool for diffing, patching, and merging Blender files (perhaps much easier to make this work than the general directed acyclic graph solution I described in that video, which I’ve made no progress on since then).

This is also useful as I’ve started writing up a series of articles with the working title “Ten Years of Film Making for Lunatics” as a lead up to releasing the first episode, with the hope of creating a bit more buzz around the project.

I sort of asked myself: “Hey, it’s been ten years that I’ve been doing this. What have I been doing with my life?!” And then I figured maybe I’d better seriously answer that question. I have, I think, done a lot of interesting things on this project. Not all of it has made it into the public eye, and some projects are still stalled for one reason or another — might be time to try to wake them up and get them finished.

Also seems like a good way to segue into some tutorial material and/or pump up interest prior to releasing Episode 1. Which I still hope will happen soon.

My  goal for November is again to return to direct production work. I plan to start with the assets I identified to be remade or upgraded — namely the ‘life support pack control panel’ and the ‘rag doll rig for the bunny rag doll’. Then I plan to reassemble the replacement shots for the train sequence (the original file was corrupted by linking problems and scale errors, and there are inconsistencies with the set, so I can’t just re-render it — I have to do some reconstruction work).

And then I want to finally re-do the animation on the new Soyuz assets to match the old animation in the teaser trailer from 2012. That’s a LOT of changes to bring it up to speed with the new NPR3D “look” and the updated set and character models.