September was mostly spent on solving household and car problems, although I did a bit of production work on Lunatics S1E01-SU.

For Lunatics, I worked a little on the PLSS control panel prop. Working on that, I realized I needed more context, so I created a storyboard for the shot and recut the sequence. In doing so, I concluded that the whole scene needs to be revised. Ultimately, I re-edited the Audacity and Kdenlive projects, removing some dialog and moving others around. And I trimmed the scene down to just one minute. I think it’s now much sharper and the pacing is  better, while the animation requirements are easier to meet.

I learned how to link multiple spreadsheet files together, which gives me a way to handle the profit-sharing breakdown for Lunatics and model our Anansi Spaceworks business. I have not yet completed the design, but I’ve demonstrated that it can work. I also recovered the pie-charts graphics I had made before and incorporated them.

Finally shipped off the defective Philips monitor. Have not yet heard back from them, but at least it’s out of here.

The YunoHost site is working so-so. I had a bit of a panic when Misskey filled up the partition on the server, due to excessive cache storage from federated posts.

Setup daily snapshot and backup scripts for the BTRFS /project partition. The script uses the BTRFS snapshot facility, and then uses rsync to update a mirror of the drive on Giles. This way there is both an easy file-recovery solution for accidental deletions, and a full backup for recovery if the BTRFS partition should fail entirely. The RAID1 redundancy also addresses the case of a hardware drive failure. This should mean that I’m insulated against
the most common sorts of disasters I might run into. We do also, of course, have the annual archival copies on offline Blu-Ray M-Discs.

The Pandemic is gradually winding down, but is not quite gone. We’ll be fighting CoViD as an endemic disease for years to come, I’m sure.

The war in Ukraine is still going on. Ukraine seems to be decisively winning, now, pushing back into the occupied areas.

Queen Elizabeth II died at 96 this month, and there is now King Charles III, formally Prince Charles. I can’t see that this affects me in any material way, but it’s obviously significant for Britain.

Brazil is coming up on a presidential election.

It’s hurricane season. Puerto Rico and the Southeastern US got slammed pretty hard by storms.

Revised Storyreel for S1E01-SU “Suiting Up” 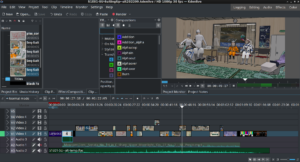 This scene has been driving me nuts for a really long time now, and I had never been happy with it. This week, I finally decided I could stand it no longer, and I wiped out the edit and started over, with a trimmed-down version of the scene that is still a little unpolished, but much better than it was!

This was the “before”: 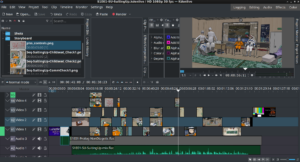 And this is the “after”:

In the end, I cut out several voice lines that I wasn’t happy with and re-cut the storyboard animatic (“storyreel”) to match. I also simplified the animation requirements, offloading some of the burden to editing (montage).

I generated a number of images, with the notion of using them on the Film Freedom / KitCAT Studio documentation site.

Also got some human faces (perhaps the slang meaning of “cat”?):

These “Library” / “L-Space” renders were meant for a page about digital archives, perhaps: