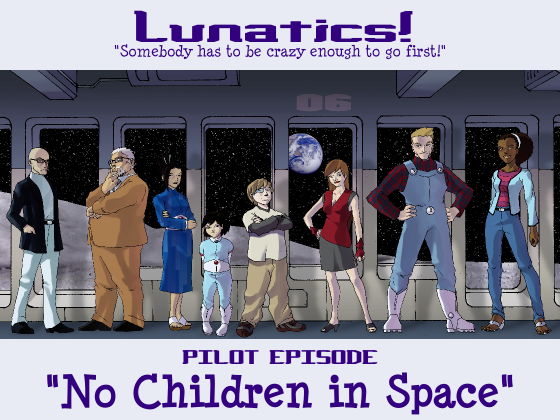 CHARACTER LINE-UP (PNG): 14 MB lossless PNG version of the color character lineup (only recommended for print magazines — there is a JPG version in the presskit).

LOGO: High-resolution logo graphic for Lunatics (the original SVG file is included in the press kit).

Anansi Spaceworks is producing a new animated web series "Lunatics!" ( http://lunatics.tv ). Lunatics is the story of the first permanent colony on the moon. This story will be released on the internet under a free Creative Commons license and will be fan-funded using services such as Kickstarter.

Anansi Spaceworks comprises writer Rosalyn Hunter and director/producer Terry Hancock, a married team of space enthusiasts. "Lunatics is the story of the trials and challenges of the first colonists to make a permanent settlement on the moon," states principal writer, Rosalyn Hunter. "We don't think that you need aliens or 'wish physics' to tell interesting stories. The more we thought about what really had to happen for people to move into space, the more we realized that it makes an interesting story in itself."

A central theme of the series is the mindset of true pioneers -- that almost irrational fanaticism that drives people to explore and build new societies. "These are not normal people," says Hunter.

Hancock adds, "It's not realistic to present space colonists as 'ordinary people' thrust into the grueling task of colonization -- there's too many people who really, really want to go and develop a space colony. so obviously, they're the ones who are going to do it."

"And we thought it would be fun," adds Hunter, "to consider what a colony run by those kinds of people would be like."

If they are successful, this production will be released freely online under the terms of the Creative Commons Attribution-ShareAlike license, allowing extensive reuse of the material for educational or other uses. Since the project is also "open source", nearly all of the series assets, including 3D models of sets and characters, sound effects, and music will also be available to re-mixers, educators, and fans alike.

"The hope is for as much of the material to 'go viral' as possible," says director and producer Terry Hancock. "The more we get our production out there in the public eye, the more fans it will find, and the better chance we have for the next fan-funding cycle. that's how a free-culture production makes money."

The hard part, the couple acknowledges is getting the initial interest to fund a pilot. "It's hard to be fan-funded before you have anything to be a fan of!" observes Hancock.

The pilot episode for "Lunatics" is called "No Children in Space", and it follows the youngest of the colonists, seven-year-old Georgiana Lerner on her voyage from the Earth to the Moon in the year 2040. Despite a considerable presence of people working in space, there are still no children in space, and therefore, no settlements.

"We start our story with a child going into space and then on to the Moon, because that is the exact point at which the permanent settlement of the Moon begins."

The warmth of this story is balanced by a grand 'real space' setting. Much of the hardware on screen in the series is adapted from real design studies for space travel and space colonization. With degrees in Astronomy and Botany between them, as well as many years' experience studying the real problems of space settlement and space agriculture, the couple are well-positioned to present this material accurately.

Hancock continues, "In Lunatics, we poke fun at a lot of human foibles -- politics, personality issues, and everyday family crises. But we take the science and engineering very seriously, so in that sense, this is extremely hard science-fiction, even if the characters are more light-hearted than is typical of the genre."

"We want to make space cool again." says Hancock. "We're tired of darker, grittier, pessimistic stories about the future. It's time for optimism and rationalism to make a comeback."

In addition to writer Rosalyn Hunter and director/producer Terry Hancock, "Lunatics" will also feature a number of other artists. The character designs were created by comic artist Daniel Fu, funded through a successful Kickstarter campaign in 2011.

The series pilot showcases sixteen musical artists releasing their works under the same free-culture Attribution-ShareAlike license of the film. This ranges from the title track contributed especially to the project by composer, singer, and song-writer Elaine Walker, known for her space-advocacy band "Zia" ( http://ziaspace.com ) to Russian punk band "Distemper" ( http://distemper.ru ) whose music was already free-licensed.

The pilot features mechanical 3D modeling and rigging by Chris Kuhn and character models created by Bela Szabo based on designs by Daniel Fu. Additional characters and all character rigging has been contributed by Keneisha Perry, a California State University student who has been working on the project since 2014.

Additional modelers and artists represented in the pilot include Cosmin Planchon, Gorka Mendieta, Andrew Pray, Sathish Kumar, Guillaume Côté, and Vyacheslav Yastrebcev. The project also has commitments from seven voice actors to play the principal roles in the pilot episode, as well as additional commitments for several supporting roles.

"Lunatics" is one of a handful of projects pushing the envelope on commercially-redistributable free-culture motion picture production. If it gets its funding cycle started "Lunatics" will quickly become the largest such project -- mainly because it is planned as an ongoing series.

"We're trying to build a new entertainment industry here", says Hancock. "and we're not alone: there's also the Blender Foundation, Nina Paley's projects including 'Sita Sings the Blues', and Bassam Kurdali's 'Tube' project [film title 'Wires for Empathy'] -- all under free-culture licenses which allow for commercial or non-commercial resharing of the work. Lunatics is part of a movement in commercial free-culture projects."

"This isn't just about telling a story about space." says Hunter, "This is about being free to tell all sorts of new stories that have been overlooked by the traditional entertainment industry. We are part of a wave of projects taking the control for storytelling and putting it back in the hands of the people. Support our project and show the world that fan-funded projects can work!"

Anansi Spaceworks is asking for funding to pay for the production of their pilot episode "No Children in Space." More information about the project, including fundraising campaigns can be found at the project website, http://lunatics.tv .