We’ve crossed a pre-production milestone — the
modelsheets for the eight colonists (our main characters) are completed.
Daniel is now moving on to the artwork for secondary characters. This
puts us on schedule for our (recently slipped) delivery goal of early
May.

Model Sheets are On Schedule

In my last post, I had to announce a one-month slip. Fortunately,
it looks like we are on track to make that goal. I can breathe a small
sigh of relief now that the drawings for our eight main characters are
done (the last three are below — the previous update includes the other
five). 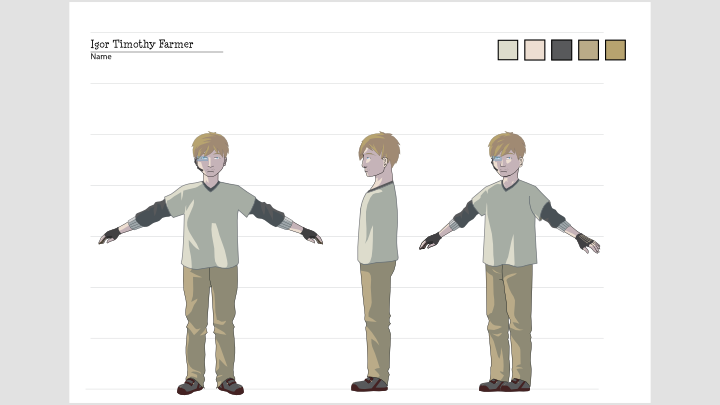 At the same time, Rosalyn is about halfway through her revision of
the script for “No Children in Space”, and she’s also made a start at
the script for “Earth” (the 2nd episode). There’s a good chance we’ll be
including the “Earth” script in the writer’s guide, too, since they are
very different scripts — you might think of them as a statement of
intent for the series, bracketing the range of styles we’re looking for.
“No Children in Space” goes mostly for the “element of wonder”, with a
lot of musical montage and cool stuff to look at. “Earth” focuses more
on character humor and dialog.

Of course, it was an intentional decision to make the first episode
not rely very heavily on dialog — for a simple production reason: we
have no voice actors yet. We hope to use an early revision of “No
Children in Space” as a recruiting tool, so I wanted something that
would stand up reasonably well with either no voices, or temporary
voices done by Rosalyn and myself. So if you’re thinking “this is an
hour-long music video”, this is why. “Earth” will give an alternative to
that.

I should probably add, that, since I’ve already gotten a couple of
queries about voice acting, casting may not turn out to be as big of a
challenge as I expected, so this may not strictly be necessary. But
we’re doing it anyway.

The two episodes together cover more or less the same ground as the
short story, “The Arrival” which we’ll also be including in the guide —
even though there’s now a lot of “non-canon” material in it due to a
large number of changes in characters and setting.

I’m close to finishing the floorplan for the colony. There’s still a
fair amount of detail work on the “recycling/services” level. This is
not really a place we expect to set a lot of scenes, but I do want to
have a complete floor plan. Most shows don’t do that, of course, but I
figured that since about 90% of our action for the series is going to be
inside this one colony set, we might as well make it complete.

What I’ve spent the most time over though recently is the design for
the lander. There are a number of tricky conflicts between design goals
and technical restrictions. In the end, I’ll probably have to just guess
about some things, and hope my aerospace engineering friends won’t
roast me too badly!