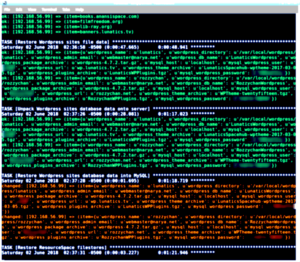 My last few days have been dedicated to the tedious, but essential task of testing Ansible scripts against the virtual machines that I created earlier.

In many ways, maintenance of our web server is 10 or 15 years out of date. A lot of new technology has been developed to automate maintaining web server software, including what is referred to as a “DevOps” model of management.This is a much more automated approach, in which system administration is handled through scripts, which make it possible to “provision” (set up) a server,  going all the way from a freshly-installed operating system to the finished site, without having to manually install the software.

This makes the site more repeatable, so you can keep the testing version of the site in sync with the live one, as well as being able to recover the previous state quickly if a new development doesn’t work out.

I’ve just about replicated the whole existing site, although I’m currently still learning how to deal with HTTPS and certificate authorities for the Subversion/Trac repository.

Hopefully just a couple more days of this before I can roll the site over to the new management system.  And then I can go back to the artistic side of the project for awhile. 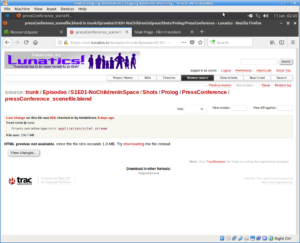 Well. That was hard. But I now appear to have an Ansible script that brings up (very nearly) our existing website on a staging virtual machine server running the latest Debian O/S (9/”stretch”).

This particular screenshot is my proof of the “last brick” — namely a file from the latest revision before the backup in our Subversion repo, viewed through the Trac app on the staging web server.

It took me about two very intense weeks of scripting and testing cycles to get to this point. Possibly someone with more Ansible experience or experience with the different packages involved could have done it faster, but I’m really not sure. It was a lot of “moving parts” to automate.

Ansible is a good package — at least one with a lot of potential, although it strikes me as still very immature, even at version 2.2 (the current latest version is 2.5, but 2.2 is standard in Ubuntu 17.10). I have found the “playbook” semantics and syntax (YAML + Jinja2 + Python) to be a little disorganized, counter-intuitive, and occasionally quite frustrating. They seem to be struggling with conflicting design goals there, as they do keep changing details of the configuration language. I hope future versions will bring improvements.  On the other hand, I certainly can’t think of any better way to automate what it allows me to automate. So mostly, I’m extremely grateful to the people who have created it.

So far, the new installation seems pretty solid. I was able to add a nice new skin to the Lunatics wiki, which makes it fit in better with the rest of the site: 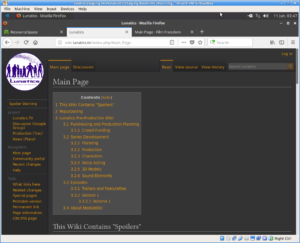 On the other hand, the new version of Resource Space seems to break my old theme. I’m choosing not to fix that right now, because I’m not sure if we’ll keep using Resource Space after the TACTIC installation (it depends on whether the TACTIC DAMS has a good enough user interface for it to serve directly as a public-facing DAMS, or not). Anyway, it’s not too bad as-is: 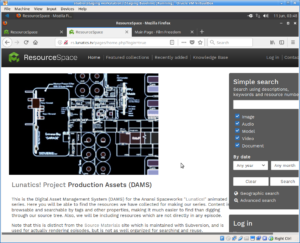 And the staging server includes the promised “Film Freedom” wiki as well, although it’s still quite empty: 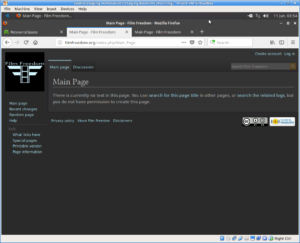 I will probably try to populate it with some basic information from the current stub site as a starting point. I’m also going to have to come up with a policy for who will be able to post on it — I’ve run wide-open wikis like Wikipedia before, but without constant maintenance, they tend to get spammed. I don’t think a small organization like ours could keep it up without having some kind of access control and membership. Anyway, the idea was to create a curated site, primarily of links to outside resources.

I plan to do a few more tests to make sure everything really is working as expected, and then I will deploy the replacement site. Don’t expect anything dramatic — the whole point of this step was to make as little change as possible! But then to be able to re-deploy the site as quickly and repeatably as possible.

This means that in future development work, if I screw it up, recovery should only take a few hours — instead of the weeks of work it has taken me to set this all up again from scratch. That will make it both quicker and safer to add new features. 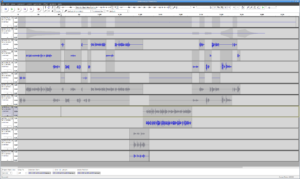 Today, I’m back to work on production. I need to block the last part of episode one, and I’ve wanted to make some alterations to the pacing and sound mix from my storyreel. So I’m starting by reworking some of the audio.What you see here is actually the Press Conference scene. The timing on this is set (we’ve already animated to it), but there’s still a bit of work on ambient sound and filtering to do. I also have not yet generated the “international sound track” which includes just a bit of Japanese dialogue in this scene (and will require us to do a modified lip-sync video for that part. It’s getting close to time for us to create that bit of animation along with the animation to the end of the episode.

The other revision I’m making is to the music. The music we used in the storyreel for this scene never fit the mood well, and now I’ve opted for leaving the music out at the beginning of the scene, relying on the ambient sound work instead.

However I’m also bringing in a little bit of the music from the following scene, so as to lead into it, as well as altering the timing in that scene and the one after it, for better unity and pacing.

Of course, all this has to be more or less settled before creating a revised storyreel and a blocking reel for that part of the episode, which I hope to get to by the end of this week.

I’m also going to be breaking the Audacity audio up into “stems” for inclusion in Ardour remixing, which I hope to start on towards the end of this month, when I’ll start setting up the final sound mix for the whole episode.

As I posted yesterday, I got to a successful installation, backup, and restore of our website on our staging server. This was an important milestone, and a good stopping place. Since I’ve already spent longer on that than I planned and there’s still a bit more to do before I can redeploy the live site, I decided to switch back to production for the rest of this week. I will be be getting back to the IT work next week or the week after, depending on how long it takes me to finish the blocking to the end of episode one. 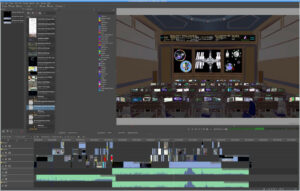 Going back-and-forth between audio and video editors today.This is the “blocking reel”, now out to the end of the episode. Parts of it are just copies from the “storyboard reel” which we had before, adjusted for timing changes, but I hope to have all of the character-animation sequences converted to “blocking” by the end of tomorrow (meaning animation setups with posed characters, representing the approximate placement of characters and cameras on set).

That’s a necessary first step for Keneisha Perry to begin animation on those scenes. She’s already close to finished on the animation for the beginning of the episode, where most of the character animation sequences are.

I had planned to also block all of the mech shots, but decided to leave that for a bit, since I cut into my available time working on the website scripts last week. With that change, I should be more-or-less on schedule, and I can do the mech animation work in parallel. 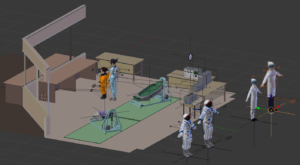 Screen capture from Blender. This is a “sequence” file, with the set and characters linked into it, ready to start roughly positioning them for each shot in the sequence (“blocking”).

Hiromi is here twice, technically — because we have the “flightsuit” and “spacesuit” versions of her in this sequence. 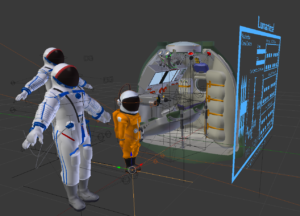 Some of the first animation we did on this project was of the Soyuz spacecraft interior, and I’ve continued to use some of that animation since then, even though there are a number of serious problems with it.

However, most of those assets have had to be completely remade and we’re going to start recreating those scenes with the updated assets now.

So I’m blocking those scenes out again. 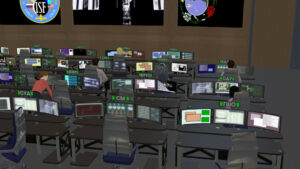 Adding posed extras to the Mission Control Room sequence file. Right now this is just a still for the new and improved storyreel. But the file is actually the animation sequence file for the real shot.

Already it looks a lot better. 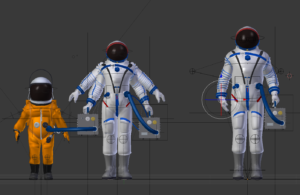 Something’s not right here!(Probably have two copies of Hiromi’s spacesuit mesh in the character file).

The hoses are rigged with hooks for this shot. In particular, Georgiana’s hose is hooked to her suit, while the ventilator is parented to Hiromi’s hand, this should allow the hose to stretch and bend as the two characters walk. First use of this kind of rig — we’ll have to see if it does what we expect.

Hiromi and Sergei’s spacesuits are modeled on the real “Sokol” spacesuit generally used with Soyuz. Georgiana’s is a custom design, loosely based on a Space Shuttle IVA suit and a lunar surface EVA suit (it’s supposed to be a dual-use suit custom built for Georgiana, possibly as a prototype for future child-size spacesuits).

Suiting Up for Space 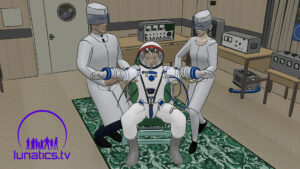 Render for the blocking reel: Hiromi in her spacesuit, getting ready for flight.

We’re working on finishing out the blocking for the first episode. As I set up animation sequence files for each shot, I make still renders which go into an updated storyreel to guide the final animation. 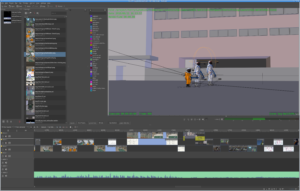 Just about through blocking all the character sequences to the end of episode 1. You can see the last few sketched storyboards left here. 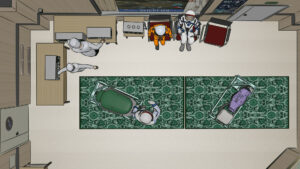 One nice thing about CG — the cameras are magic!

I had gotten an overhead shot like this during modeling of this set, and thought it’d be really cool to include it in the show. But I had gotten it originally by removing the ceiling layer in the model. This has the problem that you don’t get correct reflections of the ceiling on shiny surfaces in the scene (most notably, HIromi’s suit visor, which picks up the rectangular fluorescent lighting panels in the ceiling).

Fortunately, Blender have this magical feature that you can cut off anything too close to the camera — so I just set it long enough to delete the ceiling. So the ceiling is still included in reflection calculations, but doesn’t block the view. Magic!