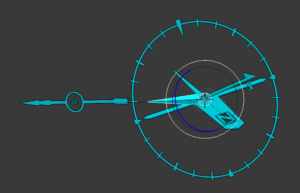 I am creating a sunlight control armature. This rig essentially calculates the correct position for the sun in the sky, based on information about the location on Earth, time of year, and time of day:

Right now, these have to be manually set. I probably could write a driver program to input more familiar values: latitude, date, and local time, but I’m not sure if it’s really necessary.

The rig in the picture is set to about 7AM for Baikonur in April, which is when the pilot episode is set.

The reason I want this rig, other than just getting the lighting angle right, is that I plan to animate it for a “timelapse” effect during the “Soyuz Rollout” sequence. Actually putting a rocket on the launch pad takes a good part of a day, and our script calls for condensing that into two “timelapse” shots, both of which will use this rig for the changing daylight.

The next part in the process is to attach the sun lamp, shadowcaster-lamp, and hemi fill (for scattered light) to the rig. I also need to create some kind of “airmass” control to deal with the light changing near sunrise and sunset due to passing through the thicker atmosphere and clouds. I haven’t quite figured out how to do that, but essentially it will need to redden the light.

There’s also going to be a “Sky” hemi which will gradually change color during the day, but it will probably remain straight overhead, representing the broadly scattered light from the blue sky.

And then we’ll need our existing “cloud deck” animation system to cast cloud shadows and show the clouds evolving and moving in the sky (the current system uses a procedural “cloud” texture, with the Z axis changing the clouds, while X and Y move them across the sky dome).

It’s nice to finally put my astronomy knowledge to work on this project!

Also nice to have finished the beginning-of-year administration work and be back to production work.

I know it’s probably not very clear yet what this will look like, but don’t worry, I’ll be posting more updates soon!