We had good weather for most of this month, so I took advantage of that by doing a lot of construction, maintenance, and grounds work. Not so much development or production, although I did work on LunaGen and some ancillary art, including the cover poster for “No Children in Space”.

Also downloaded a collection of profiles for standard styles of moulding. Could be useful for traditional sets. I don’t know if it’ll be any use for the colony sets, though.

Found a missing texture for Hiromi-Kimono character model. Restored it. This might mean we should re-render the early part of the “Touring Baikonur” sequence, when Hiromi is wearing this dress.

Worked on the Episode 1 “No Children in Space” Cover Art / Poster graphics. Created high-resolution renders of Hiromi, Georgiana, and the Launchpad.

Continued developing the tests and refactoring LunaGen. Separated the Lunatics Project webpage into a separate project in Eclipse. Getting the LunaGen source ready for separate release on Github (or similar).

Developed tests derived from HTML Tidy and checking that file output is unchanged from previous runs.

Restarted the Tumblr queue. I realized that since I was moving all the content onto the lunatics. “Production Log”, I wouldn’t have thes problems sharing it that I had with Patreon posts.

Discovered “YunoHost”, a system for easily installing services on a server. I should be able to use it to install a number of the tools I’d like to have for the project, with much less hassle. Haven’t tried deploying it yet, though.

Closed up the ceiling hatch opening in the soundbooth. Gathered materials to finish lining the soundbooth with carpet as a sound dampener.
Installed a second shelf in my office closet. 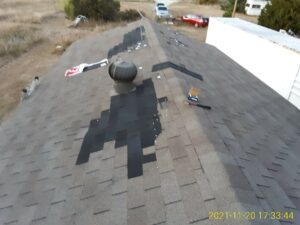 In Texas, November tends to be the time of year when the weather is good for working outside: not too hot, cold, wet, or windy. So, I have mostly been taking advantage of this to take care of important household chores, such as finally getting around to repairing our leaky roof — we’ve lost quite a few shingles over the last couple of years, and I did not manage to fix those until this month. It is now much better, although it is true that the new shingles don’t match the old ones (they didn’t have gray shingles in stock at the time, so black ones, it is — on the plus side, this makes it easy to see which ones I replaced recently).

I also fixed the flat on my mower, mowed lawns, did a little carpentry and plumbing work, and so on… I will not bore you with the rest of my “day job”, but it had to be done, and  “Lunatics Project” work has taken a backseat to these things.

However, I have made some incremental progress on various fronts:

I’m just about ready to upload the source code to my Film Freedom GitHub. I’m still removing some of the “Lunatics!” website from it, replacing with a generic test site (I’m angling for the full test site to also be the LunaGen documentation page, but I’m not quite there yet).

Speaking of the website, it needs updates and upgrades. I’ve found my existing hands-on approach (largely using custom Ansibleplaybooks) to installing software to be a little overwhelming to keep up with. But I don’t want to fall into the “Software as a Service” (SaaS) trap of putting everything on (generally proprietary) “platforms”.

So I was very intrigued by some of the options I’ve been reading about: particularly Yunohost, which as I read the copy is a little bit like a package system for server installations, making it easier to set up a wide variety of “apps”, which really means servers. Several of the supported apps are things I have already used (e.g. WordPress, MediaWiki, phpBB, Seafile). And many are things I might like to use (e.g. Gitea, GitLab, Mastodon, Pleroma, PeerTube, OnlyOffice, Collabora), but have not been looking forward to configuring. And there are lots of apps I might want to try out to see if I want to use it. Finally, if I really need something else (e.g. Resource Space, TACTIC, Subversion, Bazaar/Breezy, Trac), it looks like packaging for YunoHost might not be that hard.

Alternatively, there are some projects for open source project hosting, such as Codeberg, that might be an advantage. The main advantage I see here, over a self-hosted Gitea instance is that it would be independent of my own server, and should something happen to my server (or me), my software would still be out there. This has also been a reason for wanting to use GitHub, rather than relying on my self-hosted Subversion. Another is just having an experienced human being figuring out the usability issues — I still have no public access to the “Lunatics!” sources on lunatics.tv, because of the way I have authentication and authorization set up (I’d ideally like to have a read-only public copy, and only require authentication to make changes).

I’ve been telling myself I’m going to fix a lot of these things, but it’s been a long time. I’m leaning towards finding another approach.

Migrating the “Lunatics!” code from Subversion to Git may present some challenges, but I know it can be done, and doing that would make it much easier to use some of these pre-packaged solutions.

I recently got an account on Mastodon.art, which is part of the Fediverse of federated social media, and has so far proved to be a much friendlier place than Facebook, Twitter, or Tumblr has been for me. I’m not leaving my old accounts behind, because there are still people I want to connect with on those sites. But I am spending more and more time in the Fediverse, and it generally produces a lot more “engagement” than proprietary platforms have done — maybe just because it’s a more like-minded group of people attracted to the open source social media world. 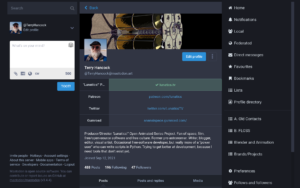 As for Mastodon specifically, I can list a few pros and cons:

There’s room for improvement, but overall, I like it a lot.

Partly because I feel like I’m getting close to a release, and partly to improve my own morale and motivation, I’ve been working on marketing and packaging materials, and ancillary “merch” I might be offering to raise funds from the episode release (and towards making the next episode).

I’ve got several things in mind there, including a couple of possible patch designs. My personal favorite is the in-universe “Soyuz SF-19” mission patch, which would be created for the Soyuz flight in “No Children in Space”, following present-day space launch conventions. But another possibility is a patch with the “Lunatics Project” logo (the characters silhouetted against the Moon) — a slightly cheaper design that would actually mention where to find us.

I will probably complete the “trading cards” designs that I showed earlier, though I didn’t do much more than look at them this month.

And of course, I just completed renders for the cover art for “No Children in Space”.

And I’m exploring other possibilities. I was planning on doing a 3D printed figurine as a custom USB (or as a prototype for getting a run of custom USBs made commercially, if there were sufficient demand) at one point, though I’ve found the source file for that isn’t usable as-is. I’d have to work on it quite a bit to make it work.

So, I’ve still managed to do a few project-related things this month.

In the early part of December, I’m probably still going to be doing a lot of work on my house, and then I will be taking some family time for Christmas, so I don’t know if I’ll be able to make very much progress on production.

I would like to finish up the ragdoll rig and upgrade the details on Georgiana’s life-support package. If I can’t get the movement like I want in the existing shot, I may break it down with some closeups, and the detailed panel will help with that. The ragdoll is in the Suiting Up sequence and the Launch sequence (where it’s attached to Georgiana’s suit).

In early January, I have to deal with accounting and tax reporting, though those should be simpler for 2021.  And as it gets wintry, I’ll be indoors a lot more, so it’s a natural time to do some production work. I’m hoping to finish up character animation then, which would be a major milestone.