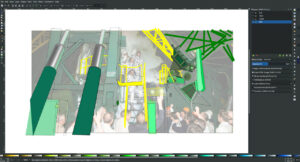 Given our relatively limited information about the design of the “Gagarin Start” launchpad, our 3D model doesn’t quite hold up for extremely close shots, like this one of the crew on the stairs (a fairly standard mission photo, which is where the reference comes from). I tried just “cheating” it, but the result was a little dodgy.

So I decided to go back to the reference material and just draw a 2D backdrop for this shot, in which I wasn’t planning to move the camera anyway. Only the actual stairs and the crew will be created in 3D for the final shot.

It’s still a pretty complex drawing! This thing is a beast!

The angles are weird, it’s a very strange structure, with lots of trusswork, bearings of unbelievable size. Because what we’re looking at there are the articulated supports for the huge gantry arms that hold the rocket on the pad and provide access to it — although I’d have a tough time being more precise about which is which.  I do know the elevator that goes up the main access arm/tower is just to the left of the crew in this shot, hidden behind some of the structural elements.

After experimenting with Krita a little bit, I decided I’d get the best results drawing the background in Inkscape as a pure vector-drawing. So that’s what I’m doing here. I might do some over or under painting later to get more nuance in the shading, but I think the look straight out of Inkscape might turn out to be a good match to our NPR 3D style.

I’ve been at it about two and a half hours now. Clearly will be at it for a few more. The shot will be on screen in the episode for about 2-3 seconds — just long enough to see our space travelers waving to the crowd! 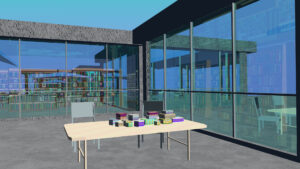 We’ve had this set for quite awhile now, but it’s a bit sparse, especially since it’s supposed to be a busy open-air market and shopping center.

My original concept was to use a lot of billboards on this set, but I finally decided it’d actually be easier to just do some simple models. Here, I’ve added some of the extra decorative boxes for the vendor table where Georgiana gets hers. And I’ve put some bookstore shelves in the glass shops behind it (will they have such large bookstores in 2040? — well, probably some anyway).

Also, this shot shows how much the shiny shop windows are going to reflect the are behind the camera, so I can see I’m going to have to populate that area pretty well, too.

A lot of these are really simple models — the boxes on the table are really just stretched cubes (6 vertices) and hexagonal “cylinder” meshes (14 vertices), for example. The books are just color and bump textures on more stretched cubes. Very low-poly.

Two shots in the “touring Baikonur” sequence are on this set. 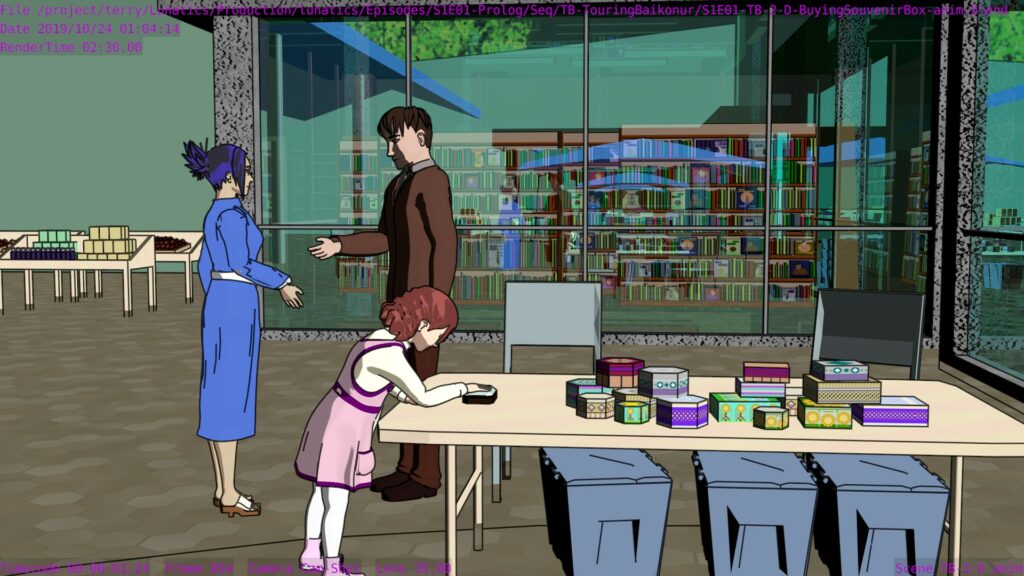 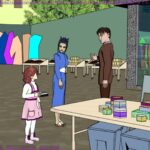 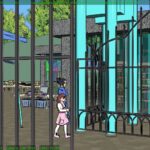 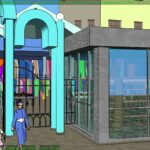 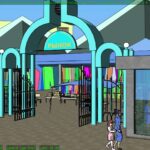 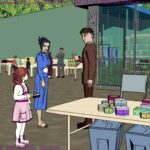 This has been a very incomplete set for a long time — I’ve been adding set dressing props to it, improving the materials and textures, and generally try to make it look better. It’s not there yet, but this is already a big improvement.