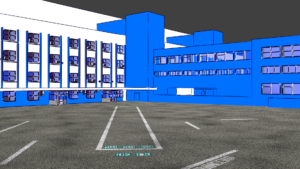 Finished up the rigging for the staging of the launch vehicle for shots in S1E01-SF-SoyuzFlight sequence.

Finished materials and set dressing for the Bldg254-Ext set for the S1E01-LA-Launch sequence. Got a little start on the shot, and I revised the linking plan for S1E01-LA, moving the actual launch back into it (I decided it was better to keep it that way, even though that creates some duplications with SF).

Created a promotional video for the Open Movie DVD release, communicating what sort of stuff will be on the disk. In the end I decided not to include voice-over, and just used intertitles, clips, and music. I think it’s pretty effective. It’d also be easy to translate.

In the process, I created fancy turnaround character animations to use in the promo. These would also make nice looping GIFs — I should consider using them on the website.

Discovered a lot of my software, including LibreOffice was not available or working! I did a lot of software installation work and finally got most of the stuff working again.

I also made a list of critical software packages, and what version of them I am using.

In the process of making software installations, I did install the Eclipse IDE, and recovered my Eclipse workspace. This puts me in a pretty good position to work on software again (when I’m ready to do that).

I haven’t been posting much, but I’ve been busy. Earlier this month, I spent time working on the rocket plume effect for the Soyuz launch vehicle (in early January I worked on getting a single nozzle plume, but later, I worked on replicating that out to the 32 nozzles on the launch configuration of the Soyuz (that’s 4 main nozzles on the Core Stage engine, plus 4 vernier rocket nozzles on the Core Stage, plus 4 main nozzles and 2 vernier rockets on each of 4 Pod Stages — it’s a lot of rocket nozzles!): 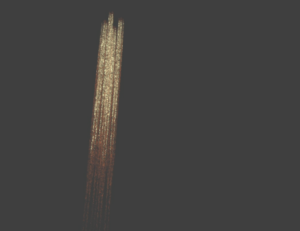 And then the upper stage has another 8 rocket nozzles (I’m counting nozzles instead of engines, because Soyuz actually uses single engines that have four separate combustion chambers, but a shared turbopump — so that’s actually just one main “engine” on each stage): 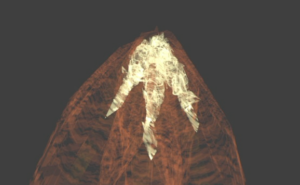 Now I’m working on updating the rigging for the Launch Vehicle and converting it to a hybrid armature rig for animation (as with earlier conversions, much of the rigging is still done with empties and constraints directly, as Chris Kuhn originally set it up, but the actual control panel is an armature — this means I only have to proxy a single object into the animation file).

I’ve just completed re-rigging the Soyuz Launch Vehicle model. This is a crude animation test, just to show the rig is working in a linked shot file. I can see it’s going to take some careful timing with the pod separation process to get a smooth movement, but the mechanism seems to work.

The pod breakaway and tumble motions are based on two different driver systems, with the pods handed off from one to the other as the “Pod Staging Tumble” slider is moved. The “Breakaway” system includes a more realistic non-linear motion as the pods release from the core stage.

Test renders for materials and detailing on the “Bldg254-ext” set.

This is the outside of the “integration” building at the Baikonur Cosmodrome, also known by its building number, 254. Among other things, this building contains the “aquarium room” that allows for the press to observe cosmonauts getting ready for the flight, and for conducting the pre-flight press conference, without the cosmonauts catching any diseases before their flight, which appears in the “Press Conference” and “Suiting Up” sequences. This is outside of the building.

Part of the flight ritual for cosmonauts is the “commissioning” or “agreement to fly” on the Soyuz, a brief ceremony in which the crew formally accepts their mission from the commissioners. There are pavement markings with everyone’s marks, including press, cameras, and other observers.

The final shot will include a number of crowd extras, and our crew (Sergei, Hiromi, and Georgiana) walking along the path. We don’t actually include the commissioning ceremony in our animation — instead we do a turn-around wipe that merges their walk out of the building into walking towards the pad (which of course, actually skips over the ceremony and a bus ride — as the pad is several kilometers away from this location).

This might be a good opportunity to address our process for modeling real locations as we needed to do for this episode. And, in particular, places none of us have ever been.

This required a little bit of “intelligence” research!  Fortunately, I have taken classes on interpreting and extracting information from satellite photos, which I could combine with reference photos taken by visitors on the ground to get a pretty accurate idea of the locations (good enough for our purposes, anyway).

I’m not too worried about the detailing on this set, as it only appears in one fairly short shot, but it does need to give the impression of the building. I’ve dressed it based on a variety of reference shots taken at the site, like this one: 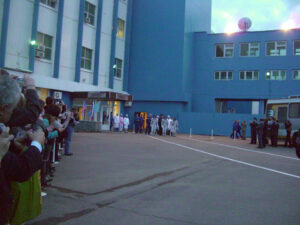 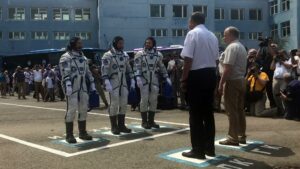 Image of the commissioning ceremony (including the pavement marks) (DLR – German Aerospace Center / CC By 3.0).

The model was created for “Lunatics!” Project by Travis Souza during his 2015 student internship, based on plan drawings I drew up based on these and other visitor photos and Google satellite imagery, which allowed for getting the plan scale approximately correct. 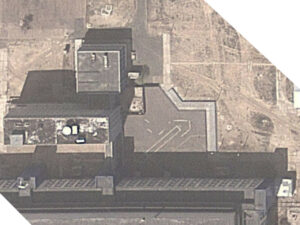 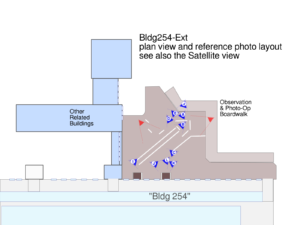 Overhead plan view I drew in Inkscape, based on visitor photos of the site and the satellite imagery. The lettered blue marks indicate estimated camera positions for available reference photos, which I also provided to Travis for modeling reference. The red ones indicate expected shots we’d need for the animation, so as to clarify what parts of the model would be on-screen.

I collected the reference photos and plan into a “reference pack” for Travis to work from. Unfortunately, I won’t be able to included this in the open movie release, because many of the photos are either not free-licensed or not clearly licensed at all. Using them in this way for reference is clearly “fair use”, but including them in an open movie release wouldn’t be (probably, anyway).

Of course, our set doesn’t include the entire building (which is quite large!), but just the part we needed for this shot.

In reality, a fair argument could be made that this building will likely look different or not even be in-use anymore by 2040. But using it was part of my goal to make the initial flight into orbit a familiar “present-day” part of the story, using a currently-active space transportation system. 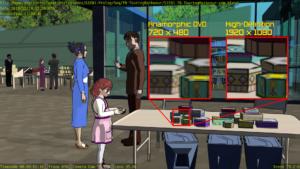 It’s been kind of a rough week in Texas, and when I get creatively blocked, I sometimes spend a little time on side projects. This is for a brief website promotional video about what will be included in “Open Movie Edition” DVDs.

It’s a simple comparison of resolutions for Anamorphic standard-definition DVD video (720×480 pixels, with elongated pixels) and HD 1080p video  (1920×1080 with square pixels). I plan to include both versions on open movie release disk, and I wanted to show the difference in quality.

Otherwise, I’m involved in rearranging and relinking shots in the “Launch” sequence. And I’ve also been reviewing the software I use to note the packages, sources, and version numbers for documentation purposes (useful for anyone attempting to work with my episode source files). 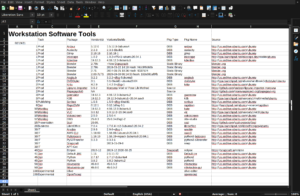 I spent some time checking and updating my production software, paying particular attention to the versions and builds of the software I have been using, or plan to use in the near future. This is an ODS spreadsheet — I’ve attached the actual document below.

I plan to include this table, possible along with some of the harder-to-find package files in the episode sources that I release, so that people trying to reconstruct shots can make sure they are using the same versions of the software, in case some scene files aren’t forward compatible.

Obviously, this is subject to revision.

Trying out a turnaround style for use in promo videos. This was fun, though it does need a little tweaking.

Had fun doing the turnaround for Hiromi, so I decided to do some more. Allen Emerson has been kind of neglected, since he won’t show up until episode 4 of the animated series.

He’s also the only one of the main characters for which we used the original model by Andrew Pray. Keneisha Perry did some additional modeling and rigging work. And of course, it’s based on the concept art and modelsheets by Daniel Fu, from Rosalyn’s character description.

I gave both of these characters just a tiny bit of animation to make them seem like they are actually standing there for their turntable shot.