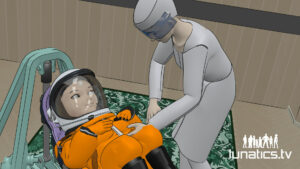 This was a rough month, from a mental health perspective. We enjoyed the trip to New Mexico very much, but coming back was a hell of a comedown, and all the problems started rushing back in. I had crushing existential depression for a couple of weeks.

Gradually, though, I started to get back into the swing of things, and I felt better again.

Started writing a series of articles for the Production Log, called “Ten Years of Film-Making for ‘Lunatics!'” The first article is a somewhat autobiographical review of the influences that led us to this project, which I’ve tentatively subtitled “Origins”.

Major consolidation of “Lunatics!” source files, merging the three source partial copies of the source tree I had before, and eliminating the “lunatics-unversioned” tree. Then checking it all into Subversion, so now the whole thing is in VCS. I was still working on this at the end of the month.

Had an idea for implementing our project business logic in Python rather than trying to use ODS spreadsheets for it all. I thought of calling the code “PAFF” for “Production Accounting for Free Film”, and implementing the basic ideas of tracking profits from sales back through the various account splits back to individual accounting for contributors. Not sure about this, but it seems like a promising idea, and maybe simpler than trying to use spreadsheets, which I’m not particularly skilled at managing. Python code seems much easier to test, in any case.

It’s been a little while since I posted, so just for patrons, I wanted to let you in on what’s up.

At the beginning of August, we decided to take a much-needed vacation and see some sights in neighboring New Mexico, which is a fairly short road trip from where we live in Texas, and has a lot of natural beauty and some interesting science and space history.

For those concerned, we are all personally vaccinated and obviously followed all the mask protocols, despite the madness going on around us here. We also spent the majority of this time in wide open National Park spaces, though we did visit some museums (the picture is the wall mural in the elevators at the Space History Museum in Alamogordo, which depicts a Space Shuttle flight deck).

Overall, it was a good trip — I wrote a more detailed account on my personal blog, if you’re interested.

Now that we’re back, I’m dedicating this time (probably to the end of August) to home repairs and other maintenance issues, some personal health concerns, and other stuff in my life that just needs attention right now. A lot of stuff has been neglected, and I really have got to deal with these things. My mental health was getting pretty shaky again, with all the various stresses over the last couple of years, so that’s needed a little attention, too. Just got to take the time to get my head back together.

I plan to get back to animating on the episode in September. Animation may be my weakest skill in Blender, and this has been pretty slow going. I’m trying to get by with reference footage and patience. In the future, I hope we’ll have a new character animator, but for now, it’s just me.

The movement in this shot is still kind of a mess, but I’ve been working on it. I’ll start up with this in September, after I’ve dealt with my other responsibilities.

Well, it’s a bit depressing that my new and pricey large Philips monitor has developed a fault. However, it is still in warranty, so I think will probably be able to get them to cover this. It is a hassle, though. Especially if I have to ship this thing back to them, as it is quite large. I suspect there’s a loose ribbon cable inside somewhere, but I’m not going to void the warranty to look for it.