This month, the weather has continued to be pretty mild, and I’ve continued with construction and maintenance work, although I managed to finish up some tasks for Lunatics. And of course, the holidays intervened at the end of the month.

Completed the cover / poster art for episode 1, “No Children in Space”.

Started work on some control panel widgets to upgrade the portable life support system (PLSS) box for Georgiana, as I’ve decided to add a cutaway close-up shot in the “Suiting Up” sequence.

Created a 14-seg message display, with rigging to allow the displayed message to be changed with an armature (it’s necessary to have the messages pre-prepared, but it supports 22 messages, so that should be plenty).

Reseated the RAM in my graphics workstation, Sintel. This got me back to 32GB RAM. Hadn’t even noticed it wasn’t all being detected until I had problems with the poster rendering.

Created an “art versus artist” image for a shot from the press conference. There’s an “art vs artist” meme going around with a (solo) artist in the middle, surrounded by samples of art. I thought to try inverting it, so I put the artists who contributed to a particular still around the outside of it. I’ve only done one, so far.

Added trim boards in the front of the studio library (weatherproofing the front door).

Purchased and tested a site generator. This is our solution in case we get another cold snap like last year and the power goes out. In a pinch, we can set it up well away from the studio and run an extension cord in through one of the access ports to power a heater. In the long run, I’d like to install a proper transfer switch, so the power will come through the internal wiring, but the current solution meets our emergency requirements.

Also installed a carbon-monoxide alarm in my office.

Worked on the soundbooth: added sound baffles over the vents and more carpeting to soften echoes.

Almost done with this poster art now – I had hoped to finish before December, but there’s still some remaining tweaks needed.  For printable poster-quality art, I needed to render at very high resolution.

The first challenge was to set up the posed characters to match the previous illustrations. This was pretty tricky. It’s remarkable how much difference even very tiny facial pose changes make! But I think I’ve gotten close enough.

And to accommodate the various roles for the art, I wanted to be able to crop to vertical “portrait” and horizontal “landscape” mode framing, so I had to extend the field of view.

And for some reason that’s escaping me right at the moment, my Freestyle ink lines aren’t always rendering as they should.

But the design work is pretty much done now. I’m just trying to get the software to behave.

I also plan to do some light touch-up work in Krita after rendering. There’s a few not-quite-right details that need to be adjusted.

As for the designs, I’ve done layouts for a 13×19″ limited-edition poster, a 12×18″ (30x45cm) advertising poster (basically the same poster, but without the margin for framing and without the signature and numbering block), the video “poster” image (the image you see in the video player before it starts playing), a square version for the LunaGen site “episode list”, and even a wrap-around DVD clamshell cover design — though I’m still not sure if we’ll have that package style at all.

It’s fun to try out the alternatives.

After a number of reconfigurations of Blender, Krita, and Inkscape. And also reseating my RAM modules so I’m working with all 32 GB again (at some point, without me noticing, half of them had stopped working), I got the paint and ink renders at 300dpi for the cover and poster art for episode 1, which I’m now just calling “No Children in Space” (I’ve been inconsistent about what this title represents, but I’ve decided not to make an omnibus of the pilot arc, and I can’t really think of a better name for the pilot episode than this, so I might as well use it).

This is a thumbnail of course (and I added a watermark with the URL for posting it here), but the original is 16,200 x 5,400 pixels, which works out to 18 x 54 inches (45x137cm) if printed out at 300dpi as a poster. I might actually use the whole thing for a conference display or something.

But the reason for the dimension is to accommodate a variety of portrait and landscape cover art designs. For clamshell media cases (DVD, Blu-Ray, or Lib-Ray), the ideal is to have a wrap-around on the left side to go to the back cover. For the video poster image (the image that appears in a video player before you hit ‘play’), it’s generally better to have the art either centered, or to the left, putting the text on the right side.

And of course, movie posters, book covers, and the front cover of media cases, would generally be either square or in portrait mode.

I posted drafts of these layouts in my previous post — so far, the only difference is the updated art render. You may notice that the poses of Hiromi and Georgiana aren’t quite identical to the previous ones — these are new compositions, though very similar.

This isn’t quite finished — I plan to do a little bit of touch-up in Krita to deal with some fine details that aren’t quite right (and don’t really show up at this resolution).

Obviously there are some geometric paradoxes in this design — you couldn’t really take a photo like this. But that’s the beauty of NPR! You can think of it as a collage if you like.

It is my plan to produce similar art layouts for each episode as part of a “marketing package”.

Episode Two will feature the “Lunar Transportation System” and probably also showcase the colonists Josh and Tim Farmer, who we meet in that episode. Episode Three will probably feature the “Moon Truck” design on the lunar surface, and should showcase Rob Lerner and Anya Titova.  Episode Four will feature Allen, and probably show the Sun eclipsed by the Earth, perhaps incorporating the colony exterior. Five might feature the Iridium Base. Six is definitely going to feature Sarah. And Seven should be some kind of ensemble arrangement, since we’ll finally have all eight of the colonists together.

Of course, with this one, I’m not just designing for this episode as an isolate movie, but also trying to set the style standard for how all of these will be laid out, in terms of package design, text, and logo placements.

The daunting part is this implies actually producing six more episodes: which is clearly not going to work at the present rate of production. Something will have to change for that to happen, and it’s probably going to involve more people and therefore money.

But first things first. The real push for expanding the project will have to follow after releasing this first episode, even though I still don’t know exactly when that will be.

Working on some detailing. Nice to get back into Blender.

The 16-segment display was surprisingly easy to create. I just exploited an available free “16-segment” font (the fonts-dseg package in Debian, of the upstream  DSEG fonts, under the Open Font License).

These are TrueType fonts, and the files can be directly used by the “Text” primitive object in Blender, which I did.

The “~” character maps to the full 16-segments and I added the “.” to provide the decimal LEDs, which are rendered in a duller color, while the “live” segments are a separate text with a bright emission material.

It’s mostly a monospaced font, so the overlap works, although spaces are oddly 1/4 of a character width (“1/4 em”) and the periods don’t have any spacing at all — I had to insert periods and adjust the character spacing to get those to come out.

But the payoff is great: it’s trivial to type whatever text you want displayed.

I plan to create a rig with multiple text objects that can be popped into view or hidden underneath for animation.

Of course, there is also a keypad, a couple of knobs, and a generic digital connector here (a little like a micro-USB port, but not meant to be anything specific).

These are generic elements I hope to get a lot of reuse from, but they’re motivated by the need to detail the Portable Life Support pack for Georgiana’s couch on the Soyuz, for a new shot in the “Suiting Up” segment.

I’ve recently seen another round of “art vs artist” meme images on my social media accounts, and I wondered if I could play, somehow.

Unfortunately, I haven’t done much solo work in years, but it occurred to me to invert the meme and put a piece of collaborative art in the middle, with the artists surrounding it.

This is my first try — a shot from the “Press Conference” sequence.

In addition to these core-team contributions, we’ve used some props from BlendSwap (no photos available):

I know I’ve stretch the concept a little, so I don’t know if this really “counts”, but I thought I’d try it out!

This is an animation test and demo of a 14-Segment LED display prop I created for a shot in the pilot episode of “Lunatics!”, “No Children in Space”.

This is a last-minute asset added, because I decided I need an extra close-up shot, with a control-panel detail for Georgiana’s “portable life support system” (PLSS) prop. For it, I’m creating a keypad, some knobs, and this 14-segment display readout.

In order to animate the display, I created a rig based on popping pre-written messages into view. There are up to 22 messages, and they can be used together, if you are careful not to overlap them. You control the message by simply lifting the appropriate control bones — which are constrained to keep them aligned properly. Up is “on” and down is “off”. 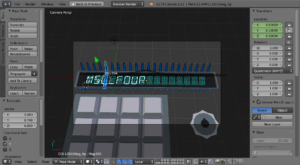 For a given application, I’ll include the desired messages in the prop model.

You’ll note the demo includes a “spinner” in some of the later messages — an example of simple loop-animations I can use some of the message slots for.