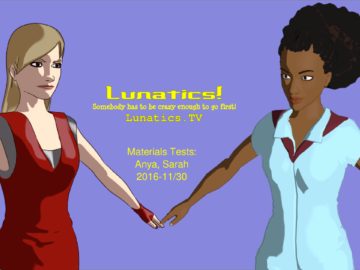 Lately, I have been investing a great deal of time in infrastructure development, so there hasn’t been…

When we wrote the characters for Lunatics! , we didn’t really give a whole lot of thought to how easy they would be to cast. It was only after that, that we started to seriously consider how hard it might be to find someone to play Anya convincingly. In the story, of course, Anya is a native Russian who speaks English very well. If we cast an American voice-actress who would then play the character with an accent, it would undoubtedly sound noticeably fake. Also, if she ever had to speak Russian, it would mean a real loss in credibility for anyone who understands it.

Drawing of “Anya Titova Farmer” / “Anya” by Daniel Fu (from the concept art sheet), digitally inked and colored by Terry Hancock. “Anya Titova Farmer (M.B.A.) is business manager of the ISF lunar colony. She comes from a long line of Russian entrepreneurs, astronauts, and rocket engineers. Her father Anatoly Titov and her Uncle Konstantin Titov manage the Titov Space Industries, founded by her grandfather Igor Titov. She received a degree in international business from the Russian Academy of Economics (RAE) and a Master in Business Administration from the University of Arizona. She is also founder and part owner of Sputniki Zvezda Serebryaniy (Silver Star Satellites).”